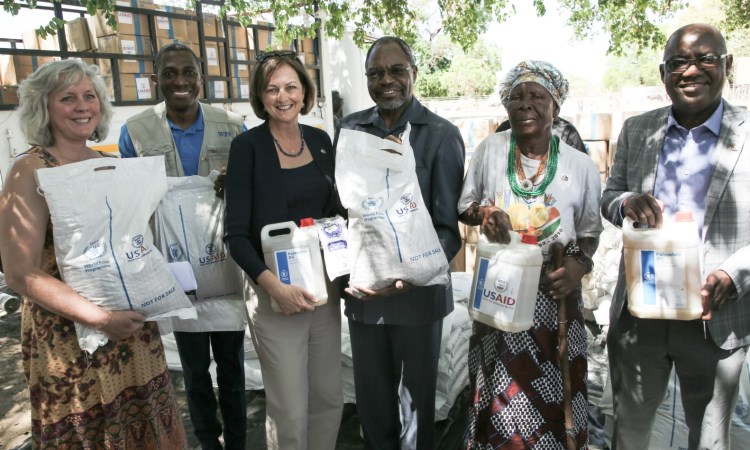 At the handing over of food assistance at Likwaterera Village in the Kavango East Region .

Rundu – Yesterday, U.S. Ambassador Lisa Johnson joined the UN World Food Programme, the Honorable Governor of Kavango East, and the Office of the Prime Minister to deliver several tons of maize meal, beans, vegetable oil, and salt to Namibians among those hit worst by the drought.  This is the first  food assistance of a total of US$8.7 million (N$130 million) in drought relief committed by the United States to the Namibian people.

“This food assistance will alleviate hardship for tens of thousands of Namibians in Kavango East and West,” Ambassador Johnson said. “The United States is delivering on its promise to help Namibia through the drought. In the next six months, U.S. food assistance will help more than 350,000 Namibians.”

The Ambassador, accompanied by the UN World Food Programme Country Director, the Kavango East Governor, and the Executive Director of the Office of the Prime Minister, distributed an initial tranche of food assistance to Likwaterera and Neyuva Villages in Kavango East.

The US$8.7 million committed by the United States is the largest drought-assistance commitment by a foreign government to Namibia. The funding is provided by PEPFAR and the USAID Food for Peace program.