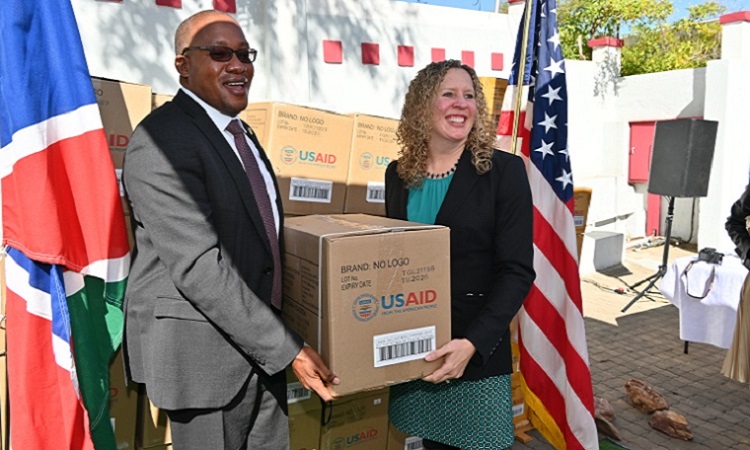 At the handover of 6.9 million condoms and 2.6 million lubricants is Ben Nangombe, the Executive Director in the Ministry of Health and Social Services and Jessica Long, U.S. Chargé d’Affaires.

Windhoek – The United States handed over 6.9 million condoms and 2.6 million lubricants to the Ministry of Health and Social Services to address supply shortages. Namibia has one of the highest HIV prevalence rates in the world, and condoms continue to be a health sector priority for preventing the spread of HIV.

These commodities are valued at US$275,000 (approx. N$4.3 million) and will be distributed to 273 hotspots and 14 pick-up points mainly targeting Key Populations (KPs) that are not yet supplied by the Ministry of Health. KPs include female sex workers, men who have sex with men, and transgender people, who are particularly vulnerable and disproportionately affected by HIV due to high-risk behaviours, marginalization, stigma, discrimination, violence, and criminalization, all of which contribute to a lack of access to health services.

“U.S. founding father Benjamin Franklin once said, ‘an ounce of prevention is worth a pound of cure.’ While there has been notable advancement in the development and deployment of ARV treatment, there is unfortunately still no cure for HIV. This is why prevention is so important,” highlighted Jessica Long, U.S. Embassy Chargé d’Affaires, who handed over the donation to Ministry of Health and Social Services Executive Director Ben Nangombe.

The condoms and lubricants were procured with funding from the President’s Emergency Plan for AIDS Relief (PEPFAR) by the United States Agency for International Development (USAID) through its Global Health Supply Chain Program. The commodities will go to the KP-STAR project, which supports 75 facilities in and around Windhoek, Keetmanshoop, Gobabis, Otjiwarongo, Oshakati, Oshikango, Walvis Bay, Swakopmund, Rundu, and Katima Mulilo. In addition to providing condoms, KP-STAR is the only project that distributes lubricants to Key Populations in Namibia.

Since 2005, the United States has partnered with the Namibian government and NGOs to make HIV services more widely available to communities throughout the country. These condoms and lubricants will contribute towards the overall fight against HIV/AIDS.