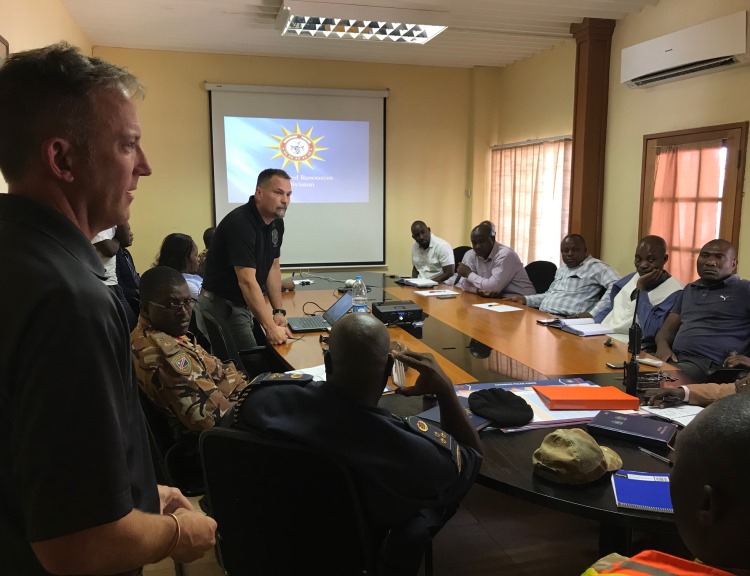 The FWS Investigator is a 20 year veteran with extensive experience on investigating the buying and selling of bear, bear gall bladder, and bear parts in the state of Maine for global markets.

The FWS investigator shared an example U.S. criminal case with parallels to the poaching of rhino and elephants in Namibia.  In these investigations, U.S. poachers captured baby eels known as elvers that are then trafficked to Asian countries, grown to full size, and harvested for world-wide sushi consumption.

The accompanying FWS Attaché based in Gabarone, Botswana provides investigative and enforcement assistance with criminal investigations in Southern Africa that involve international wildlife trafficking.  When asked about the impact of this speaker event, the Attaché stated, “This program is just one step in the continued working relationship between NAMPOL and the U.S. Fish and Wildlife Service as Namibia has demonstrated success in decreasing the number of poaching incidents this year.”

The interaction and liaison between the FWS and NAMPOL officers has generated future collaboration efforts in evidence collection training and an offer by the U.S. FWS lab to conduct free DNA testing on poached animals.

Wildlife trafficking is an area of shared interests between the U.S. and Namibian governments.  It is a pivotal time for Southern Africa as the region battles wildlife trafficking threatening its economically vital tourism sector.   The U.S. Embassy in Namibia remains supportive of the Namibian Government’s efforts to curb poaching and wildlife trafficking and looks for every opportunity to support these efforts.