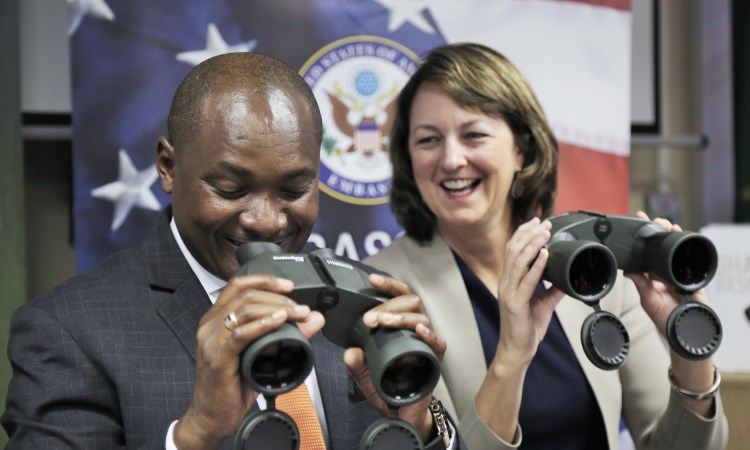 Hon. Minister Pohamba Shifeta and U.S. Ambassador Lisa Johnson try out some of the 65 pairs of low light binoculars donated in support of the Ministry of Environment and Tourism’s anti-poaching efforts.

Windhoek – The U.S. Embassy provided the Namibian Ministry of Environment and Tourism N$6.8 million of equipment funded through the U.S. Foreign Military Financing Program (FMFP) for biodiversity to be used in Namibia’s anti-poaching efforts.

These 65 pairs of low-light binoculars are the first items to be delivered. Other items arriving over the next couple of years will include GPS receivers, camping equipment, crime scene investigation equipment, and vehicles.

Handing over the binoculars to Minister of Environment Pohamba Shifeta, U.S. Ambassador to Namibia Lisa Johnson stated, “Wildlife crime is pushing some of the world’s most emblematic species toward extinction and driving a lucrative criminal industry around the world. Wildlife crime is a critical threat to economic development and it undermines security and threatens legitimate economies. In Namibia, wildlife is an important cultural and economic asset, contributing significantly to tourism and sustaining the livelihoods of tens of thousands of Namibians.”

Ambassador Johnson concluded by explaining, “The U.S. Government investments support Namibia’s own efforts to protect its wildlife. We currently have projects of more than $20 million USD – nearly N$300M – dedicated to conservation and combating wildlife crime in Namibia. The United States is committed to continue working closely with the Namibian government to stop poaching and wildlife trafficking.”