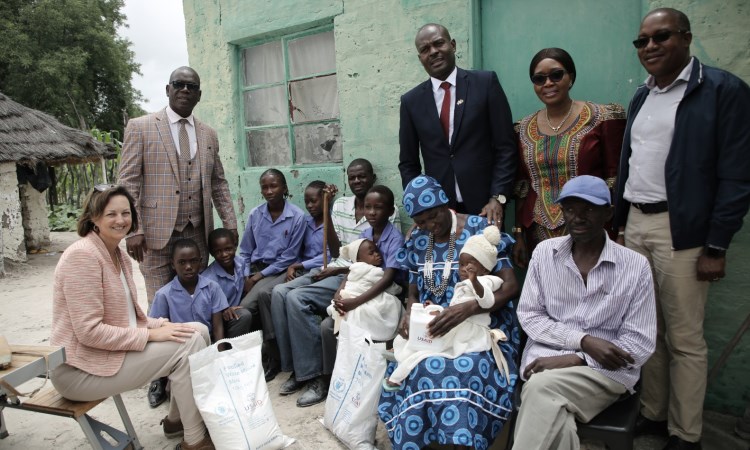 Ambassador Lisa Johnson, Oshana Regional Council Chairperson, Governor of the Oshona Region, Prime Minister of Namibia and Executive Director of the Ministry of Health and Social Services with one of the families who received food assistance.

Ondangwa  – U.S. Ambassador Lisa Johnson and Prime Minister Saara Kuugongelwa-Amadhila joined the UN World Food Programme (WFP) in Oshana Region on February 17, 2020 to deliver more than 85 tons of maize meal, beans, and vegetable oil to more than 12,000 vulnerable Namibians that are affected by the drought.

This food delivery forms part of the US$8.6 million (N$127 million) in food assistance committed by the United States to the Namibian people.  In December 2019, food distribution started in the drought affected Kavango East and Kavango West Regions, and food assistance now is being extended also to Kunene, Omusati, Oshana, Oshikoto, Zambezi, and Omaheke Regions.

Ambassador Johnson highlighted the importance of the food distribution despite recent rainfalls in the northern part of the country because people still need assistance to feed their families until the first harvest.  “The United States is delivering on its promise to help Namibia through the drought.  In total, over the coming months, U.S. food assistance will help more than 350,000 Namibians,” Johnson said.

The US$8.6 million (N$127 million) committed by the United States to procure and deliver more than 10,000 tons of food assistance is the largest bilateral drought-assistance by a foreign government to the Namibian people.  The funding is provided by PEPFAR and USAID/Food for Peace.