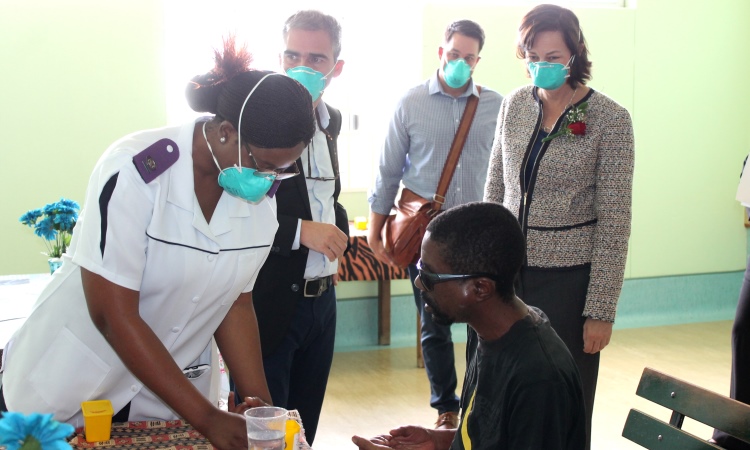 Windhoek – On 19 March 2018, the United States Ambassador Lisa Johnson, together with representatives of the Ministry of Health and Social Services, celebrated the successful treatment of three young patients suffering from extremely drug-resistant tuberculosis (XDR-TB) at the Katutura Intermediate Hospital’s TB Clinic in the capital.

The cured patients are part of a group of 41 TB sufferers currently being treated for drug-resistant tuberculosis with funding for the KNCV Challenge TB Project from the President’s Emergency Plan for AIDS Relief (PEPFAR) through United States Agency for International Development (USAID). The Ambassador also visited the TB ward and handed over three electrocardiogram (ECG) machines valued N$75,000 to the Health Ministry, which will be used to monitor adverse effects associated with the use of drug-resistant TB medication in various clinics.

In the past, being diagnosed with multi- or extremely drug-resistant tuberculosis meant almost certain death. In Namibia, the United States Government, through PEPFAR , has enabled the Ministry of Health and Social Services to access new TB medicines such as Bedaquiline. The average duration of treatment for drug-resistant tuberculosis is two years of which six months may include the addition of Bedaquiline at a cost of N$1,000 per patient per day.

U.S. Ambassador Johnson pointed out that tuberculosis is responsible for more deaths than any other infectious disease in the world, particularly among people living with HIV, and highlighted the significance of the KNCV Challenge TB Project in supporting the country’s fight against the disease.

“In Namibia, TB infections are on a downward trend and successful treatment cases are on an upward trend. It remains, however, critical to ensure that people living with HIV minimize their risks of contracting TB,” said Johnson.

Dr. Dave Uirab, Medical Superintendent at the Central Hospital and representing the Acting Permanent Secretary of the Ministry of Health and Social Services at the event, applauded the United States for its continued support through PEPFAR:

“We thank the U.S. Government for the support we have been given, through different partners, with special mention of USAID operating through the KNCV TB Foundation, and urge them to continue availing assistance that makes such a huge difference to my government’s programs and especially to the lives saved.”

With over 120 patients, the TB unit at Windhoek’s Katutura Intermediate Hospital has the busiest tuberculosis ward in the country, where the most complicated cases of drug-resistant TB receive specialized care. Currently, 41 patients are enrolled in the program to treat multi- and extremely drug-resistant tuberculosis. In appreciation of the life-saving PEPFAR funding, the cured patients handed over a painting done by one of the clinic patients to the U.S. Ambassador.

PEPFAR is the largest commitment ever by a single nation toward an international health initiative – a comprehensive approach to combating HIV/AIDS and TB around the world.  In Namibia, PEPFAR is led by the U.S. Ambassador and programmed by an inter-agency management team that includes the USAID and the Centers for Disease Control and Prevention (CDC).