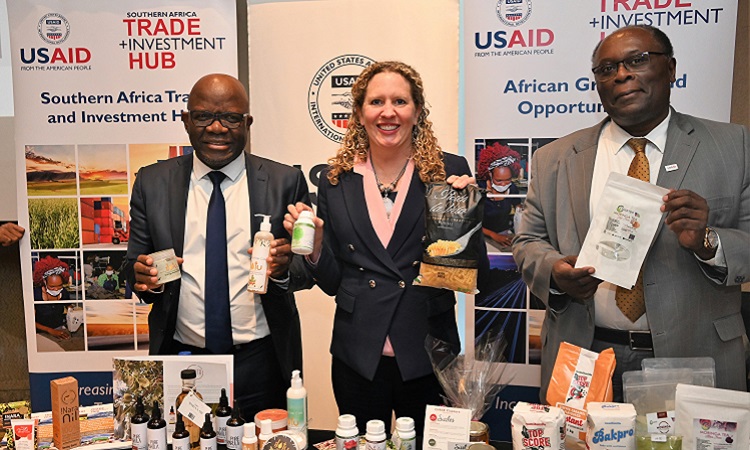 Windhoek – Today, the Chargé d’Affaires of the Embassy of the United States to Namibia Jessica Long and representatives of the United States Agency for International Development (USAID), together with the Namibian Government, reflected on the past six years of the Southern Africa Trade and Investment Hub (USAID TradeHub).

The event in Windhoek brought together stakeholders from the Namibian market to share experiences, successes, and lessons learned in enhancing the flow of trade and capital between Namibia, South Africa, and the United States – especially under the African Growth and Opportunity Act (AGOA).

Chargé d’Affaires Long said the United States has been a proud advocate for creating jobs in Namibia through increasing Namibian exports to the United States, fostering U.S. investment in Namibia, and supporting entrepreneurship.  The U.S. Government has been a strong partner of the Namibian private sector, particularly firms seeking to explore both the South African market and the U.S. markets through AGOA.  As a result of the USAID TradeHub’s efforts, the United States has supported Namibian exports to the value of approximately USD 2.7 million in the past three years.

These successes include AvaGro, which received support from USAID to break into the South African market after attaining a vital agricultural practices standard; and Desert Hills, which, through the TradeHub, participated in the 2022 Summer Fancy Food Show in New York to connect with potential buyers and is now better positioned to export to the United States market.

Thanks to the USAID TradeHub, Namibian firms are also seeing advances in export readiness.  Local firms are gaining confidence and skills in pitching their products to potential international buyers, improving their ability to close deals.  Companies with a clear export strategy and plan are more focused and effective in terms of addressing the specific requirements and succeeding with exports.

The USAID TradeHub activity is transitioning to the USAID African Trade and Investment program and will continue to support Namibian firms to increase exports by overcoming complex market entry requirements and connecting them with South African and U.S. companies.