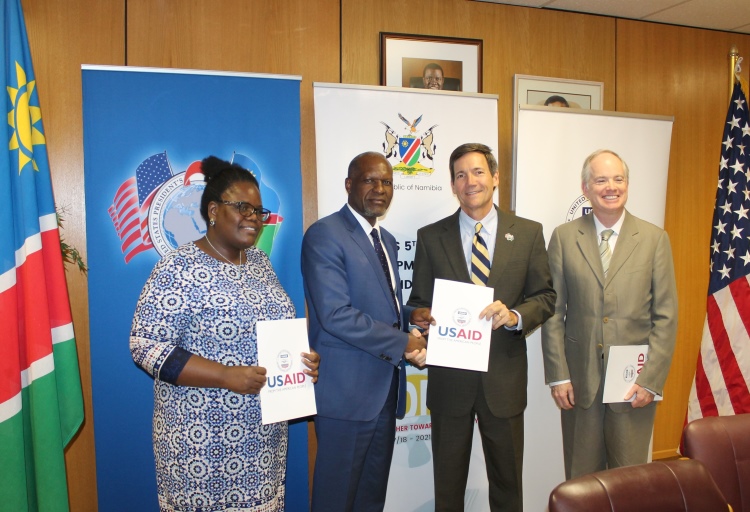 Windhoek – On 06 November 2017, the United States Government (USG), represented by the Agency for International Development (USAID), and the Government of the Republic of Namibia, represented by the National Planning Commission (NPC) and the Ministry of Health and Social Services (MOHSS), signed an amendment to their 2007 bilateral grant agreement to add US$31 million (N$435 million) of funding under the USG’s President’s Emergency Plan for AIDS Relief (PEPFAR).  These resources will fund activities under the 2017 PEPFAR Country Operational Plan (COP17).  With the addition of US$31 million, USAID’s contribution to the agreement totals US$293 million (N$4.1 billion) since its inception in 2007.

The agreement was signed by the Minister of Economic Planning & National Planning Commission, Hon. Tom Alweendo, and the Deputy Minister of Health and Social Services, Hon. Julieta Kavetuna, as well as the Director of the USAID Southern Africa Regional Mission in Pretoria, South Africa, Mr. John Groarke, and the Ambassador of the United States of America to Namibia, His Excellency Mr. Thomas Daughton.

Under PEPFAR, USAID and its USG partner agencies (the Centers for Diseases Control and Prevention, Peace Corps, and the State Department), together with their implementing partners, support MOHSS to combat HIV/AIDS in Namibia. This work includes general HIV testing and treatment, prevention measures, capacity building and logistics support. All of these elements are essential for Namibia to be able to reach the UNAIDS 90-90-90 goals (90% of all Namibians infected with HIV know their status, 90% of those individuals are on treatment, and 90% of those on treatment are non-infectious).  When this is achieved and sustained, the HIV epidemic will officially be considered under control.  Namibia is close to achieving this goal.  PEPFAR’s focus is on identifying and treating those who are infected but who have not yet tested, particularly individuals living in areas with a high prevalence of HIV, as well as on population groups most at risk of contracting HIV, such as young women and older men.

PEPFAR is the largest commitment ever by a single nation toward an international health initiative – a comprehensive approach to combating HIV/AIDS around the world. PEPFAR employs the most diverse prevention, treatment, and care strategy in the world, with an emphasis on transparency and accountability for results. In Namibia, PEPFAR is led by the U.S. Ambassador, and programmed by an inter-agency management team chaired by the PEPFAR Coordinator.

Since Namibia’s independence in 1990, USAID has supported Namibia’s development in sectors that include health and HIV/AIDS; basic education; community-based natural resource management; economic growth; democracy and governance; environment and biodiversity; and humanitarian assistance. Since 2010, USG development assistance to Namibia has focused on the HIV epidemic (and its related health challenges, such as Tuberculosis), with USAID supporting the Government of Namibia’s national HIV response, in coordination with civil society.