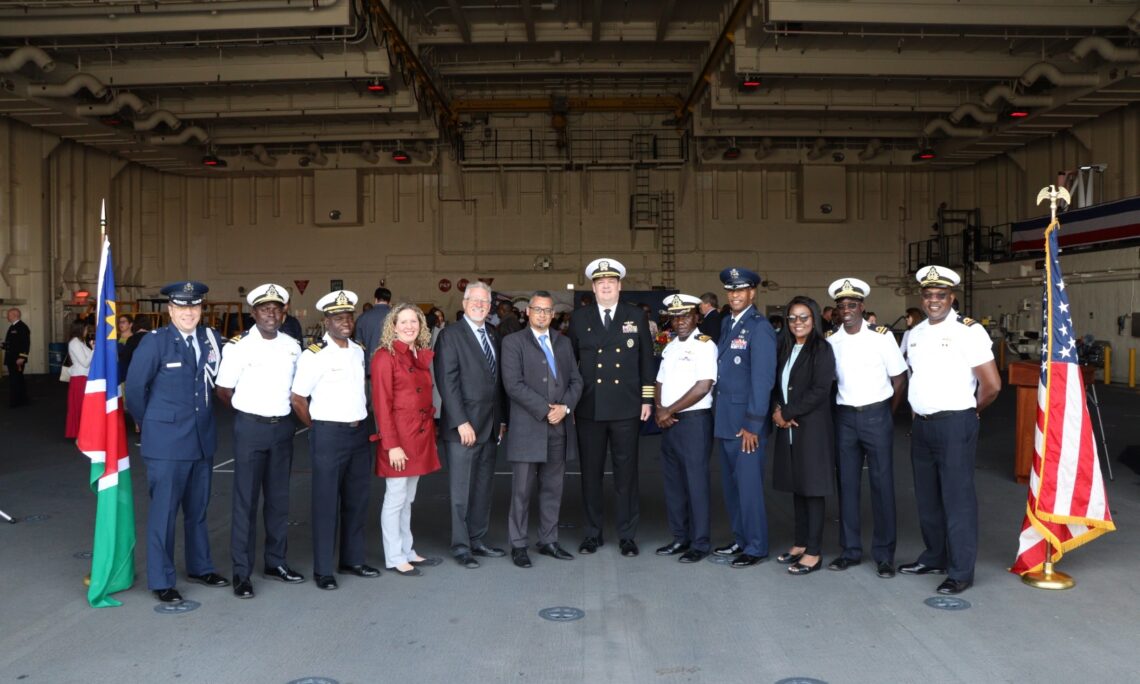 The Chargé d’Affaires of the United States Embassy, Ms. Jessica Long, welcomed the ship to port alongside a senior leader delegation from U.S. Africa Command. Namibian government and military leaders as well as members from civil society and the international community then came aboard the ship for a tour of its operations. The USS Hershel “Woody” Williams last visited Walvis Bay from September 16-18, 2021, when the crew conducted exchanges and participated in joint training with the Namibian Navy.

“Following our last visit to Walvis Bay in 2021, we hoped to continue fostering relationships with our Namibian counterparts,” said Captain Chad Graham, commanding officer of the USS Hershel “Woody” Williams. “We are thrilled to be returning less than a year later, continuing to engage with our partners here and promote security in the region through a consistent maritime presence.”

Earlier in 2022, Namibia participated in Exercise Obangame Express, the largest annual maritime security exercise in Western Africa, alongside neighbors like Angola and other partners such as Brazil. These exercises play a central role in not only strengthening bilateral partnerships, but also allowing partners to work more closely to address the region’s most pressing transnational maritime challenges.

“The deployment of the Namibian Navy’s largest vessel, the NS Elephant, in support of Exercise Obangame Express 2022, illustrates not only the willingness of Namibia to partner in this domain, but also its commitment to assume a leadership role, serving as an example to other partners throughout the region. The United Sates Navy takes great pride in its partnership with the Namibian Navy and looks forward to expanding this partnership in the years to come,” said Lieutenant Colonel William Lange, Senior Defense Official and Defense Attaché to the U.S. Embassy in Namibia.

The expeditionary sea base-class vessels of the U.S. Navy provide critical access infrastructure that facilitates the deployment of forces and supplies to support a multitude of missions ranging from humanitarian and medical relief to joint anti-piracy operations.