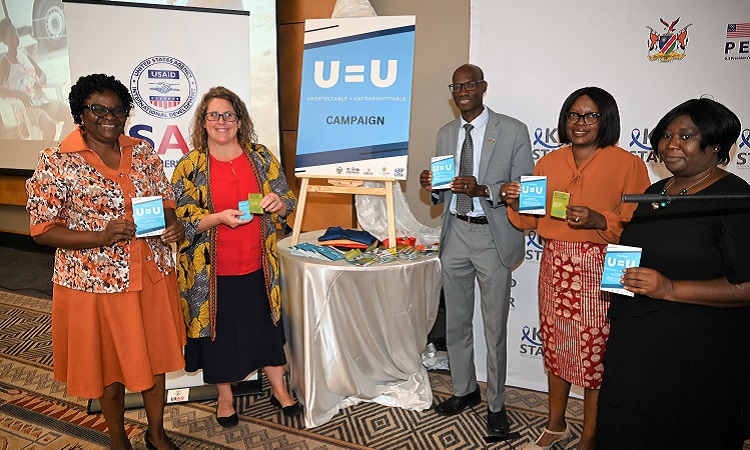 Windhoek – An HIV-positive person cannot infect a sexual partner if his or her viral load is so low that the virus cannot be detected by a blood test. This is the key message of the Undetectable = Untransmittable (U=U) campaign that was launched by the Ministry of Health and Social Services together with the U.S. Government-funded Key Populations project KP-STAR on September 29.

The U=U campaign helps to reduce stigma and discrimination of people living with HIV, encourages them to test regularly for the virus, and adhere to the prescribed antiretroviral therapy regimen to reduce their viral load to an undetectable and thus safe level. It is crucial that both HIV-positive people and their partners understand that a suppressed viral load significantly reduces the risk of HIV transmission.

Together with the U=U campaign, the Ministry launched its HIV Risk Hotspot Mapping and Key Population Size Estimation Report. This report was conducted by KP-STAR to identify hotspots in specified areas of Oshikango, Oshakati, Otjiwarongo, Katima Mulilo, Rundu, Swakopmund, Walvis Bay, Gobabis, and Keetmanshoop. Key Populations are persons such as men who have sex with men, sex workers, and transgender people, who are at an elevated risk of contracting HIV.

According to the report, Key Population members are generally well informed about HIV. However, more than 20% of them regard their personal risk of contracting the virus as low, and 5% even stated that it was impossible for them to get infected with HIV.

The lack of accurate information about the size and location of Key Populations is considered one of the biggest barriers for them to accessing health and other services. Laura Muzart, Senior HIV Prevention Specialist at the United States Agency for International Development (USAID) said: “The introduction of U=U and more targeted mapping and identification of key populations is a game changer for the Ministry of Health and Social Services and the KP programs in the country to help refine and better target messaging and programming.”

The KP-STAR project is funded by the U.S. President’s Emergency Plan for AIDS Relief (PEPFAR) through USAID and implemented by a consortium of partners under the leadership of IntraHealth Namibia. The five-year program started in 2020 and supports 75 facilities in ten priority areas all over Namibia.