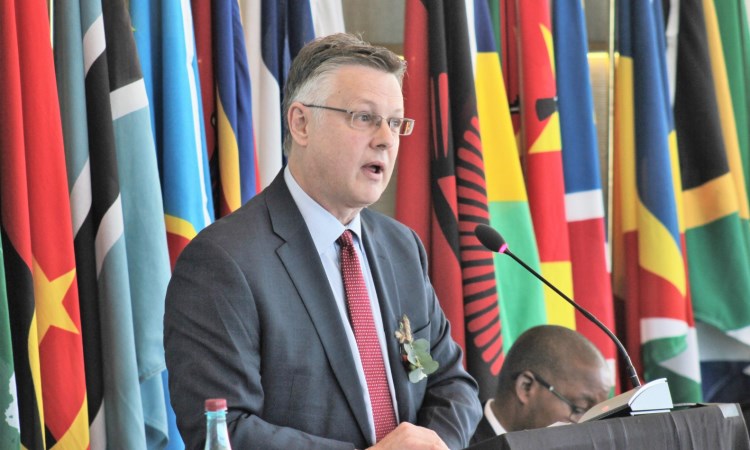 Deputy Assistant Secretary of State for African Affairs, Matthew Harrington, delivering remarks at the meeting of SADC ministers of health and ministers responsible for HIV and Aids.

Scroll down for full remarks by U.S. Deputy Assistant Secretary of State for African Affairs.

Windhoek – The U.S. Department of State’s Deputy Assistant Secretary of State for African Affairs, Matthew Harrington, visited Namibia during the week of June 17-21, with engagements covering the broad U.S.-Namibia partnership.  DAS Harrington served as the Deputy Chief of Mission at the U.S. Embassy in Namibia from 2008-2010 and U.S. Ambassador to Lesotho from 2014-2017.

On June 20, DAS Harrington delivered an address at the Ministers’ of Health Southern African Development Community’s (SADC) Meeting on a Sustainable HIV Response for Epidemic Control.  In his remarks, DAS Harrington applauded Namibia’s success in bringing the HIV epidemic from crisis to control, thanks to the partnership between the U.S. President’s Emergency Plan For AIDS Relief (PEPFAR) and the Namibian Ministry of Health and Social Services.  He also explained that PEPFAR has invested more than US $75 billion in sub-Saharan Africa, which has helped save more than 17 million lives and prevented millions of HIV infections.

At the Katutura Health Centre, DAS Harrington saw an example of Namibia’s success in combatting HIV/AIDS  in person, where Namibia is expanding its global leadership in fighting HIV by implementing index partner testing and recency testing.  This approach will allow Namibia to prevent the spread of HIV by strategically focusing on recent HIV infections and people who are most at-risk of new infection.

DAS Harrington explained how the U.S. model of partnership offers sustainable, debt-free avenues for African growth, prosperity, and human capital development.  He emphasized that U.S. companies are attracted to countries known for their ease of doing business and their consistent policy and regulatory environments.  He expressed enthusiasm about the opportunities for further growth in trade and investment between the United States and Namibia, especially through the Prosper Africa initiative launched at last week’s U.S.-Africa Business Summit in Maputo, Mozambique.

In other engagements, DAS Harrington met with representatives of American businesses present in Namibia and had lunch with alumni of U.S. government-sponsored exchange programs such as the Mandela Washington Fellowship, the Fulbright Scholarship, and the International Visitor Leadership Program.  He was able to visit Swakopmund’s COSDEF Arts and Crafts Centre constructed by the Millennium Challenge Corporation, and also met with Peace Corps Volunteers who are dedicating two years of their lives to community development all around Namibia.

Follow this link to listen to an interview with DAS Harrington (10 minutes): https://soundcloud.com/usembnamibia/das-matthew-harrington-visits-namibia

Good morning.  It is a pleasure to be here with you today, back in the country where I spent two years as a diplomat.  I am honored by the invitation to speak with you about the impact of the U.S. President’s Emergency Plan for AIDS Relief (or PEPFAR) in southern Africa.  Through PEPFAR, we have made exceptional progress together and have broad aspirations about how we can work together to sustain this progress far into the future.

Through PEPFAR, the U.S. government has invested more than 85 billion U.S. dollars in addressing the HIV/AIDS epidemic across more than 50 countries since its launch in 2003.  This is the largest commitment by any nation against a single disease in history.  It also demonstrates the U.S. commitment to investing in Africa’s most valuable resource – its people.

Nearly 90 percent of PEPFAR’s commitment – or more than 75 billion U.S. dollars – has been invested in sub-Saharan Africa, including in the SADC countries which have been at the epicenter of the epidemic. And the results have been astounding.   PEPFAR has worked with national and local governments, ministries, hospitals and civil society to save more than 17 million lives and prevent millions of HIV infections.   It has supported lifesaving antiretroviral treatment for more than 14 million people, including 700,000 children, and it has enabled more than 2 million babies to be born HIV-free to HIV-positive mothers.  The program has also provided critical care and support for nearly 7 million orphans, vulnerable children, and their caregivers and helped prevent HIV infection in men and boys through 19 million voluntary medical male circumcisions in eastern and southern Africa.

Through our collaboration, we have accelerated progress toward controlling the HIV/AIDS pandemic – community-by-community and country-by-country.  And we have made this remarkable progress without increased financial resources over the past nine years.

It is appropriate that this meeting is being held in Namibia, which has led the way on the path to epidemic control.  I applaud His Excellency President Geingob, Minister of Health and Social Services Shangula, and their team for their political commitment and focused leadership in addressing HIV in Namibia.  For more than 15 years, the United States has worked in close partnership with them and their predecessors to achieve ambitious targets.   And, as someone who spent a lot of time working on PEPFAR as a diplomat in Windhoek from 2008-2010, it thrills me to see how much progress has been made.   That happens through hard work at the clinic level by health workers, like those I met in Katutura yesterday.  And it also happens at a policy level.  Committing to proven testing policies, such as providing treatment for all people with HIV, using the best available medications, and adoption of community-based solutions are just a few examples of how the progress is being achieved here.

And the results speak for themselves.  Namibia has reduced its adult HIV incidence rate by 50 percent in the past five years, in large part due to a dramatic increase in viral load suppression across communities and ages.  And our partnership with your governments has produced remarkable progress in other  SADC countries as well.  Eswatini cut nearly in half its HIV incidence rate between 2011 and 2016.  Lesotho, Malawi, Zambia, and Zimbabwe also have all reduced their HIV incidence rates by more than half since the launch of PEPFAR in 2003.

It is important to note that Namibia and South Africa are also well on their way to assuming full financial and programmatic responsibility for their HIV response.  Namibia contributes 65 percent and South Africa 75 percent of their own resources toward HIV/AIDS prevention, care and treatment.  More countries will need to move in this direction to ensure the gains achieved so far are sustained.

In 2018, PEPFAR also invested nearly 900 million U.S. dollars to strengthen health systems, including more than 141 million U.S. dollars for laboratory systems.  Those investments have improved the ability of countries with sizable HIV/AIDS burdens to swiftly address other outbreaks, such as Ebola, avian flu, and cholera, and strengthened their ability to prevent, detect, and respond to infectious diseases.

In September 2017, the Trump Administration launched the PEPFAR Strategy for Accelerating HIV/ AIDS Epidemic Control (2017-2020) to provide a road map for ensuring that every PEPFAR dollar maximizes impact and drives progress toward achieving HIV/AIDS epidemic control.  The Strategy set a course to ramp up efforts in 13 high-burden countries, including Botswana, Lesotho, Malawi, Namibia, Eswatini, Tanzania, Zambia, and Zimbabwe.

In September 2018, Secretary of State Pompeo released a progress report at the United Nations General Assembly, which described significant achievements.

Through our collaboration with all of you, our partners, 13 countries – many in Africa – are on pace to control their HIV/AIDS epidemic by 2020.  Additional PEPFAR-supported countries could achieve epidemic control by 2020 if they accelerate their efforts, focus resources, and implement policies to ensure access to HIV prevention, care and treatment services for those most in need.