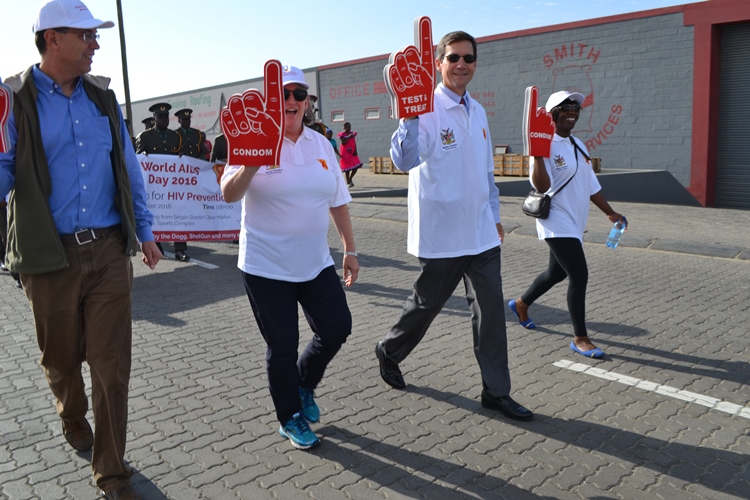 Good morning!  This is the third year that I have had the pleasure to march alongside you, and I thank you for inviting me again.  It is a great honor and privilege to be here in Swakopmund for the official 2016 commemoration of World AIDS Day.  As the international community has done every year since 1988, this day serves as an opportunity to honor those whose lives have been affected by HIV and AIDS.  We remember those we have lost, but we also celebrate those who are striving to help Namibia become the first African country to achieve an AIDS-free generation.

The U.S. government, through the President’s Emergency Plan for AIDS Relief, or PEPFAR, began its partnership with the Namibian government in the fight against HIV and AIDS in 2003.  At that time, more than 15,000 Namibians were getting infected with HIV every year.  Today, thanks to the hard work of so many people, that figure has been cut by more than half.  That’s just one example of the tremendous strides Namibia has made in combating the spread of the disease and ensuring access to quality HIV treatment for all Namibians.

Earlier this week here in Swakopmund, the Namibian government hosted the first-ever national conference on HIV and AIDS.  One of the presentations I had the opportunity to attend on the first day of the conference focused on the “investment case” for the HIV fight in Namibia.  I thought that was a useful way to look at the efforts being made by the Ministry of Health and Social Services, and PEPFAR, and the Global Fund, and UNAIDS and all of the other organizations and individuals who are engaged in fighting HIV and AIDS in Namibia.  It is an investment – it’s an investment in Namibia’s people and Namibia’s future – and I am proud that my country has been one of the major investors for more than a decade.

And, like any investor, we want to see our investment succeed.  The measure of success – the dividend for our US$1.2 billion investment since 2003 – will be seeing Namibia achieve the UNAIDS 90/90/90 target by 2020.  That means 90% of all Namibians living with HIV know their status, and 90% of the people who are diagnosed positive receive anti-retroviral treatment, and 90% of the people on treatment live healthy lives with a suppressed viral load.  My government is committed to help Namibia reach that goal by 2020, and we think it is possible.  That’s why this year PEPFAR accelerated its efforts to support HIV testing and treatment in Namibia.  We want to get to that 90/90/90 target as soon as possible.  Why?  It’s pretty simple:  the faster we get to 90/90/90, the more lives will be saved.

But we’re not there yet.  We still have a way to go to reach our goal.  One important part of getting to 90/90/90 is prevention.  That’s the reason behind this year’s World AIDS Day theme, #Hands Up for HIV Prevention.  It’s intended to focus everyone on the different aspects of HIV prevention and how they relate to different groups of people.

For me, the most important part of the equation is people.  PEPFAR in Namibia has built its strategy around people.  Working with the Ministry of Health, we have focused on bringing HIV testing and treatment services closer to communities, closer to the people who need those services.  We’re doing that by helping the Ministry decentralize treatment services to make high-quality HIV testing and treatment available in all of the places in Namibia where the burden is highest.  We’re doing that by hiring more health care professionals, by improving their access to training and the latest information, by making it easier for them to travel to patients, by making crucial lab testing more available and convenient, and, where necessary, by providing facilities for the doctors and nurses to live and work in.  We’re doing all of that with the Ministry of Health and Social Services because we know that, to prevent HIV, Namibians need to have access to quality testing and quality treatment close to their homes.  And remember that treating people with HIV also helps prevent HIV.  HIV-positive people with their virus under control don’t transmit the disease.

Let me say again, Namibia’s progress toward achieving the 90/90/90 target has been remarkable, but we’re not there yet.  To get there, we need to work even harder to reach the groups of people in the community who are at the highest risk.

One of those groups is, believe it or not, Namibian men.  Did you know that half as many Namibian men get tested for HIV as Namibian women?  What’s that about?  We can’t reach that first 90 – 90% of people with HIV knowing their status – unless more Namibian men get tested.  That’s why I want to commend the honorable Minister of Health for leading by example and getting tested earlier this week at the National AIDS Conference.  Other men need to follow his lead!

But getting men to test is only part of the solution.  Another important part of the solution for men is circumcision.  In the past year, more than 12,000 voluntary medical male circumcisions were performed in Namibia.  That’s the most VMMC procedures ever performed in Namibia in one year.  But to reach the full HIV prevention potential offered by VMMC, there need to be many more.  The science about circumcision is clear and undeniable:  it is a one-time procedure that provides men with life-long, partial protection against HIV and other sexually transmitted infections.  Circumcision is a basic part of prevention, and it’s part of Namibia’s National HIV combination prevention strategy.  We all can play a role in its success by telling Namibian men about it.

Another group at higher risk is what are called key populations: female sex workers, men who have sex with men, prisoners, members of the LGBTI community.  To ensure that no one is left behind, PEPFAR stands firmly and unequivocally with and for key populations.  When one community member is stigmatized, or unable to access testing and treatment because of discrimination, the health and human dignity of everyone in that community are threatened, and the HIV/AIDS epidemic will not be controlled.

Through PEPFAR’s work in partnership with the Ministry of Health and Social Services, we see the real possibility that Namibia can become the first African country to meet the UNAIDS 90/90/90 target by 2020.  We have the tools and the data to get there, but let me say again, it won’t happen automatically or easily.  The big money and the national projects alone won’t get us there.  We need your help at the local, community level.  Get your men tested and circumcised; help adolescent girls and young women protect their health; make sure that everyone in your community has the same access to testing and treatment.

My closing message to you is simple:  We won’t reach our common goal by pursuing business as usual.  We all need to be involved; we all need to find ways to contribute.  Together we can prevent HIV, and together we can end AIDS in Namibia.