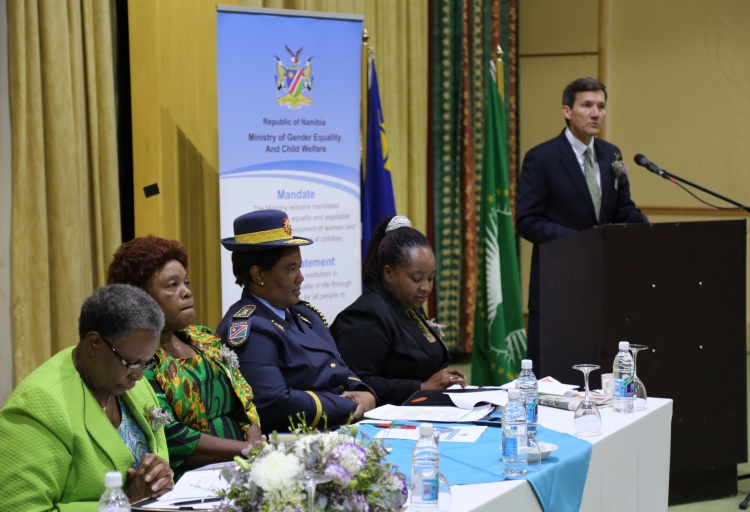 Remarks by U.S. Ambassador Thomas F. Daughton at the World Day against Trafficking in Persons

Good morning.  I am honored to have been included here today to commemorate the World Day against Trafficking in Persons.  Events like this one are essential to raising community awareness about the plight of victims of human trafficking here in Namibia and throughout the world.  I am pleased to join the Namibian government today in standing in solidarity with all victims of human trafficking and committing to end this odious practice wherever it may occur.

U.S. Secretary of State Rex Tillerson has stated that “Human trafficking is one of the most tragic human rights issues of our time.  It splinters families, distorts global markets, undermines the rule of law, and spurs other transnational criminal activity.  It threatens public safety and national security.”

That statement appeared in the foreword to this year’s edition of the U.S. Department of State’s annual Trafficking in Persons Report.  As indicated in the report, the United States places a high priority on ending the $150 billion illicit human trafficking industry.  At its core, the U.S. government’s TIP report is designed to encourage and support work by governments around the world to prevent and prosecute trafficking, identify and support victims, and shield at-risk populations.

This year’s report focuses on the responsibility of governments to criminalize human trafficking and hold offenders accountable.  To that end, it assists governments in identifying threats so that law enforcement agencies can respond effectively and gain insight into where human trafficking remains most severe.  The report also seeks to encourage law enforcement agencies at all levels to assist in targeting and prosecuting those who commit these terrible crimes.

Namibia continues to be a solid partner in eradicating this modern day form of slavery.  Many of the people here today are leading the fight against human trafficking in this country.  Their leadership has manifested itself in a number of practical ways.  The Office of the Prosecutor General, for example, continues to bring suspected traffickers to justice.  The Namibian Police Force continues to identify suspected traffickers and provide training to all new recruits on how to spot victims of trafficking.  And the Ministry of Gender Equality and Child Welfare is putting the final touches on a National Referral Mechanism to standardize the way in which trafficking victims are identified and cared for.  It is also important to note that overseeing all of these efforts is a committee, chaired by the honorable Deputy Prime Minister, that directs the national anti-trafficking effort and has convened a technical committee specifically charged with combating trafficking.

All of these significant efforts to combat human trafficking are recognized in this year’s trafficking in persons report.  The Namibian government deserves congratulations for its efforts to contribute to global efforts to address what is truly a global problem.

Of course, like my own government and all governments, the Namibian government could do even more.  This year’s TIP report recommends, among other things, that Namibia finalize and enact comprehensive anti-trafficking legislation; increase efforts to investigate, prosecute, and convict traffickers; and continue to strengthen coordination among government ministries at both the ministerial and working level.

As we come together to commemorate the World Day against Trafficking in Persons, I want to assure Namibia that the U.S. government is a steady partner in the fight against human trafficking.  We seek justice for victims and accountability for offenders.  I am confident that the good people of this country will continue the work to combat trafficking in all its forms.  And, like Secretary Tillerson, I hope this year’s Trafficking in Persons Report will serve as a tool to assist our partners in their efforts to combat TIP while underscoring the global commitment to eliminating human trafficking.

Thank you, Honorable Minister, Honorable Deputy Prime Minister, for the opportunity to join you today, and thank you all for your attention to this important issue.