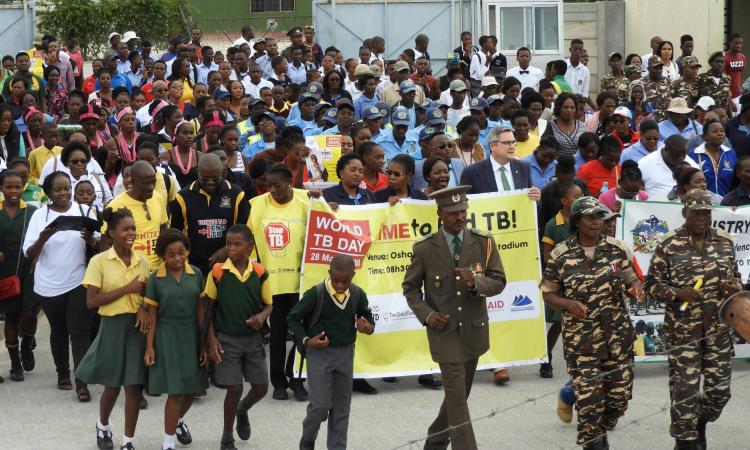 About 300 people marched through Oshakati to commemorate World TB Day under the them "It's time ...".

It is an honor to join you today in this beautiful Oshakati stadium for this year’s World TB Day commemorations.  Today’s commemorations are part of a worldwide occasion to raise awareness about the burden of tuberculosis as well as the status of TB prevention and care efforts.  It is also an opportunity to mobilize political and social commitment to end this ancient disease.

Tuberculosis is among the top ten causes of death globally, and tops all infectious diseases. In 2017, almost one quarter of the global population was infected with TB.  Tuberculosis is also the top cause of death among those infected with HIV, and in a country with a high HIV prevalence rate – such as Namibia – HIV has indeed been a driver of the TB epidemic.

The World Health Organisation reported that in 2018, ten million people fell ill with TB, of which 87% were in 30 countries with the highest TB burden.  Namibia is among those 30 countries.  Estimates are that Namibia has the 11th highest incidence rate of TB in the world.  Drug resistance is a major threat, with 7% of all TB patients in Namibia showing resistance to key first line treatments, which then requires more complex and more expensive treatment.

“It’s time…” is the appropriate theme for World TB Day 2019.  And the time truly has come for us to diagnose and help every single person affected by this disease, including those in the most remote corners of Namibia.  The United States Emergency Plan for AIDS Relief (PEPFAR) has supported both international and national efforts in combating the spread and treatment of TB.

We are also following up on the commitments made in 2018 at the first-ever United Nations High Level Meeting on TB, where global leaders committed to:

The United States Government through its PEPFAR program, which is implemented by USAID, the Centers for Disease Control and Prevention (CDC), and the Peace Corps, has partnered with the Ministry of Health and Social Services and other stakeholders in an effort to end tuberculosis in the Land of the Brave.

With support from PEPFAR and other partners, Namibia achieved a TB treatment success rate of more than 85% over the past four years.  Nearly every TB patient was tested for HIV, and close to 100% of those who tested positive have been put on ARV treatment.  USAID also assisted the Ministry of Health and Social Services with the introduction of short-term drug-resistant treatment regimens for eligible patients, reducing the length of their treatment by more than half – from two years to ten months.

The National Guidelines for the Management of Tuberculosis, which we are launching here today, are the results of extensive stakeholder consultation and interrogation of current evidence tailored into interventions that will further strengthen integrated, patient-centered care and treatment across the country.  These guidelines represent new and innovative diagnostics tools and drugs, and mark a progressive step forward for the country.

Namibia recently joined a select group of countries that started and completed population-based prevalence surveys for tuberculosis.  As a country with high case-notification rates and one of the world’s highest estimated incidence rates, this presented the opportunity to measure the disease burden in the country.  Based on the results to be announced today by the Ministry, we will have most accurate information possible to allow a more focused response.

Many partners, through the technical working group and subgroups, contributed to the planning and execution of this survey.  Among others, USAID partners assisted with developing the survey protocol, implementing and monitoring the pilot phase, conducting data management activities, and epidemiological backstopping.  CDC complemented the external technical support and funded the laboratory components of the survey.

In contrast to previous surveys, TB testing was done using Gene Xpert in mobile labs in the field.  This saved a lot of time because sputum samples did not have to be sent to far-away labs to get the results days later. Another major time-saver this time around was the end-to-end electronic capturing of data – from the point of first contact to the final data analysis.

We should all take immense pride in being associated with the first TB disease prevalence survey results that are launched here today.

I acknowledge and applaud the efforts everyone made to make this undertaking a resounding success.  This true partnership between the United States and the Namibian Government continues to bear fruits, and is improving the health of the Namibian population.

I believe that America’s commitment through PEPFAR will ensure the continuity of interventions that will further reduce the burden of both HIV/AIDS and tuberculosis in Namibia.